Dan Carey, Rob Ellis, Natasha Khan, David Kosten
The Haunted Man is the third studio album by Bat For Lashes. It was released on 12 October 2012 through Parlophone.

After returning home from the extensive Two Suns tour in March 2010, Natasha Khan tried to rehabilitate herself to rebuild a sense of who she was without the music.[1] In the meantime, she experienced a writer’s block, which led her to write the album’s opener, “Lilies”, after watching the 1970 film Ryan's Daughter.[2] She also enrolled herself in a children’s illustration course and life-drawing classes, did gardening at Virginia Woolf’s sister’s house in order to feel grounded.[1][3][4] “I just kind of rebuilt myself as a person, I think, from someone who had grown tired and a bit disenchanted with music”, she said in an interview.[5]

In May 2011, Khan said she had "the new album sketchbook under way."[6] After performing two nights at the Sydney Opera House in June, where she debuted live an early version of "Oh Yeah", she made a blog post on Bat For Lashes's website saying she would head back to the studio to further work on the new album.[7]

Billed as a "English record",[8] the album was inspired by Natasha's English ancestry and how war affected her family's relationships, and being haunted by "the memory of someone, or a lover, or things that I find heavy, like a burden."[9] It also has a nautical theme because it was written by the sea in Brighton.[9]

The songs deal with relationships, letting go of ghosts from the past, healing, and sexuality. Khan told Loud And Quiet:

“The Haunted Man is definitely a character,” she nods. “He kind of represents my old ideas about relationships and men in my life. I think that certain ideas we have are passed down to us. Like, I was raised by my mother, so that has an effect on how I feel about the men in my life. It’s about releasing these haunted, dysfunctional relationship ideas.”[4]

I think the haunted man, in general, is a concept of something or somebody or past relationships I am trying to let go of and move through and become hopeful and joyous through that process.[10]

The album cover was shot by Ryan McGinley and inspired by one of his photographs:[11]

The album cover came because I saw some photographs by Ryan McGinley which were of people with animals around their necks and there was this particular one of a naked woman with a wolf around her neck, which I found really captivating and thought was iconic. The minute I saw it I thought, ‘I’ve got to do that for this album, but I want a man. I want a man around my neck.' And the choice to do it naked without any make up, with no photo shopping, with no retouching and just trying to keep it as raw and natural as possible: it mainly came about from getting really bored of how women are projected in the media.

The man Natasha carries on her shoulders represents a burden.[9]

Natasha worked on the album for 18 months,[11] and initially had around 50 songs,[12][13] but later cut down to 11 tracks, plus three for B-sides and extras.[14] She noted that she paid for the recording sessions herself because her label didn't see any singles in the demos she played them early on.[1][4] The album was recorded around England and Italy, where she recorded the male choir for the title track.[15] Strings and horns were recorded at Abbey Road, London and arranged by Natasha herself.[3]

Natasha found the "vision of this album having much stronger vocal presence" while doing early demos in her home studio.[2] “I noticed that the demos I was doing, I’d put the vocals really loud, and stripped the reverb away, and it was just beats and basslines and vocals and not much else.”[11]

"I had a manifesto about the sound — I wanted it to be more direct, I wanted the vocals to be more upfront. The early demos are very much based on vocals, big bass, and drums, and not much music in between. For a long time there was not much music in between because I was really trying to work on the songwriting, the structure, and the kind of boldness of it. And then what I did in the studio — what I was collecting as I went along — was a lot of little performances and bits of music that kind of filled out the colour."[3]

Prior to the album's release, a video about the creation of The Haunted Man was released on Bat for Lashes' YouTube page. It was shot at Hurst Point Light, in Keyhaven, England.

"I think sometimes the past can be something you carry without realising it. Maybe in order to move forward, you have to make peace with the past."

All songs are written and composed by Natasha Khan, except where noted.

Khan wrote a song about a lighthouse keeper of sorts for The Haunted Man, though it didn’t make the final record. Hopefully she’ll release it one day, as the concept is bewitching: She imagined being the wife of Dutch sculptor Theo Jansen, best known as the creator of enormous, animal-like, moving structures dubbed Strandbeests. In the song, Khan has to compete with the beasts for their inventor’s love, racing with them every day in order to win his affection. It’s about what’s more important: your personal life, or the art that you make.[1] 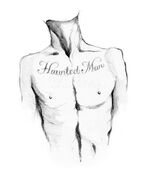 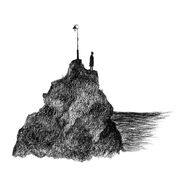 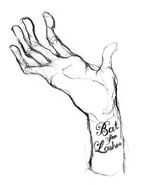