Natasha Khan
The Bride is the fourth studio album by Bat For Lashes, released on 1 July 2016 through Parlophone. The album was produced by Natasha Khan, with co-production from Ben Christophers, Simone Felice, David Baron, Dan Carey, Jacknife Lee and Matt "Aqualung" Hales.

The release of the album was preceded by the singles "In God's House" and "Sunday Love", both with music videos directed by Khan herself and John DeMenil.

This was the final album with Parlophone, marking the end of a four-album contract.[1]

"This is the hero’s journey of realising that you have to love yourself before you love someone else." ― Natasha Khan[[source]]

While promoting Sexwitch in 2015, Natasha stated that she was working on a new album. She stated that it was linked to a short film she had made about a woman going through a tragedy on her wedding day and that the album would be hopefully released in spring of 2016.[2]

On 19 February 2016, a promotional single titled "I Do" with cryptic artwork stating "Save the Date, 1st July 2016" teased the album's release. On 11 March, the lead single "In God's House" was released along with album announcement:[3][4]

The Bride follows the story of a woman whose fiancé has been killed in a crash on the way to the church for their wedding. The Bride flees the scene to take the honeymoon trip alone, resulting in a dark meditation on love, loss, grief, and celebration. Written as the soundtrack for a feature length film in mind, The Bride is Khan’s most ambitious work to date, sonically and visually incorporating an entire world inhabited by The Bride, along with the characters and places she encounters on the way.

The album was loosely based on her short film I Do.[1][5]

She further explained the album's concept in an interview:[6]

I suppose the strongest message that comes out of these songs for me is that the trauma and the grief from the death of Joe, the groom. It’s definitely more of a metaphor and it allows me to explore the concept of love in general, which requires a death of sorts. In all relationships you have this romantic ideal at the beginning, and all of these projections and Cinderella ideals that you’ll meet someone who’ll satisfy your every need, then once you get married you’re off the hook and they’ve rescued you – everything’s going to be fine. Deep down, we all have that wish that someone else will do the work for us, of keeping us happy forever. It’s a high price to pay and expectation to have.

In another interview, she said:

"Marriage is one of the few spiritual rituals we can collectively share as a culture. It’s interesting that anyone’s willing to go through this ritual, but if you take away the thing they need to fulfill that obligation, what happens? So I took away the groom and made her go on a honeymoon alone. I thought it would be a nice metaphor for falling in love with yourself, starting a journey of self-discovery. You can’t just give that responsibility to something outside of yourself – you can’t count on someone to complete you and make you happy forever. So what happens when you take the crutch away? In film and storytelling it’s really interesting when the character is flung into the opposite of their expectation."[5]

With half of the album going through a griving process, The Bride character starts to find herself by the tracks "I Will Love Again" and "If I Knew." It might be alarming to rise above death so quickly, but as Khan points out, the bride and Joe are just characters playing out an important lesson.

“The death of her fiance is like the most obvious storytelling aspect, but if you remove that, the metaphor for me is, it’s not as sad because it’s about the death of the projection of romantic idealized love onto somebody else,” Khan said. “And the projection that someone else will complete you and fulfill you and you’ll meet them and your life will be perfect. It’s the death of that kind of romantic ideal, which I don’t think is very helpful to us anyway.”[7]

The way Natasha composed the songs on The Bride was markedly different to writing her other records. She wrote the song titles first, decided what order they would run on the album and then created the words and music.[8]

Natasha said her record label's A&R initially set her up with a series of hotshot pop producers in order to push the album onto pop charts. "But I kept coming away dissatisfied," she says of the early recording sessions, "because I had such a strong vision of what the album was to sound like, and I couldn't describe it to anyone, especially people who are used to doing more pop kind of music. And so, in the end, I told my manager and everyone started to realize that it wasn't working, that process. I needed to go and produce it myself."[9]

Natasha decided to name the album after photographer Neil Krug sent her a “1940s, Hitchcock looking” image of a woman wearing a veil.[8] She told Rolling Stone:

"[Photographer] Neil Krug and I, we ended up doing all the visuals together. We started geeking out on loads of old films, sending each other old 1930s images of women with veils, and cults. And I got this vision: I told him I wanted my next project to be called The Bride. And he said, “That sounds like fun!” I wrote the story, but I know that to make a feature-length film, the production companies want you to prove you can do it with a short film first."[5]

Contrary to popular belief, the album title wasn't inspired by the cover song "The Bride", released four years prior.

The album artwork was shot at Angeles Crest Highway, California.[5]

Khan rented a house on top of Ohayo Mountain in Woodstock, New York and turned it into a studio, where she recorded the album in a six-week session in late 2015.[10] It was also recorded in London, Los Angeles, and Brighton.[11] 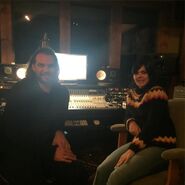 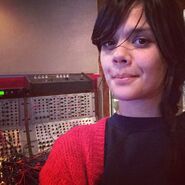 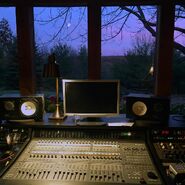 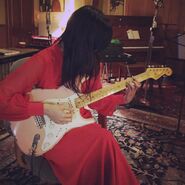 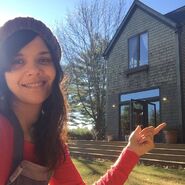 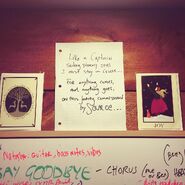 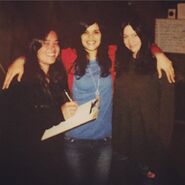 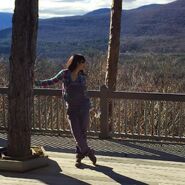 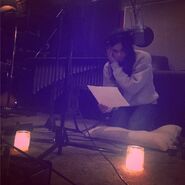 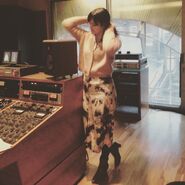 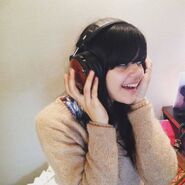 All songs are written and composed by Natasha Khan, except where noted. 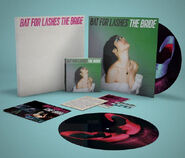 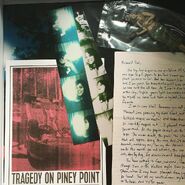 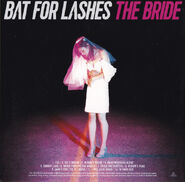